Juice WRLD, who’s real name is Jarad Higgins, has died after he allegedly took several asorted pills. The 21-year-old was rushed to hospital, where he was pronounced dead.

Eye witnesses say Juice had taken a number of pills on board the private jet including Percocet and codeine cough syrup.  The FBI also seized 70 pounds of marijuana from suitcases that were on the flight.

Juice is known to have spoken about his use of pills such as Xanax, Percocet and Lean, a cocktail of cough syrup, hard candy and a soft drink also known as purple drank. 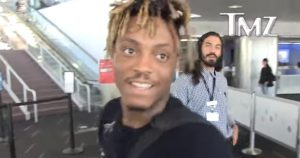 On his WRLD On Drugs mixtape in 2018, he made references to ‘Percs’, while on the song Empty, he rapped that he ‘problem solves with Styrofoam’, a reference to Lean.

However, in July he said he was ‘done’ with drinking Lean, tweeting to his girlfriend: ‘Bae I’m sorry I be tweaking, you’ve put up with more than ppl know I know I be scaring you, f*** Codeine I’m done. I love you and im letting it be known publicly that ain’t s*** f***ing up the real love I found. Learn from this everyone. Addiction kills all but you can overcome.’

Juice Wrld rose to prominence in 2018 with his hit song Lucid Dreams, which peaked at number two on the US Billboard Hot 100 chart.

His song All Girls Are The Same, was remixed by Lil Uzi Vert and drew the attention of Interscope Records, who then signed him to a multi-million dollar contract.

The 21-year-old’s cause of death has not yet been revealed, with an autopsy set to take place.

Two men on the flight, Chris Long and Henry Dean, were arrested for possession of handguns, with Long released on $1,500 bail and Dean released without bail.